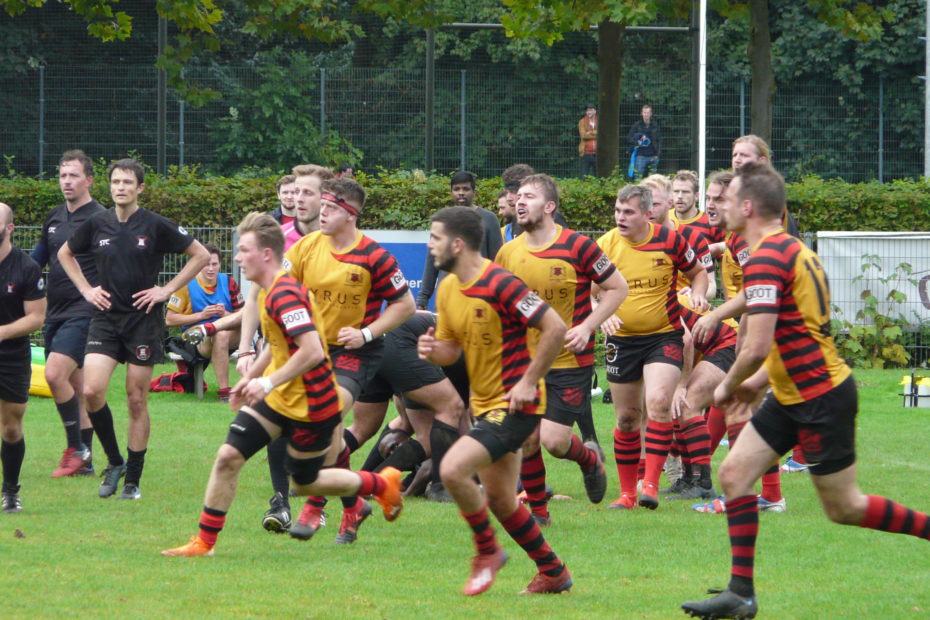 After a very long wait, we are finally playing again! Pre season seems to have been going on since March where the Löwens were training as much as they could – it should be noted that the City of Hamburg restricted sport much more than any other part of the Country. We have worked hard on implementing a new way of playing, and new procedures on and off the field, and which will take time to adjust to.

Our first game was hosted by DRC vs Neckarsulm SU and was split into 4 quarters of 20 minutes. It took the HRC Löwens 40 minutes to get into the game vs a opposition who had played multiple times throughout the season. There were a lot of new players, combinations and a lot of positives to take away.

The second game vs BSV at home seemed to have gripped us with nerves. Playing at home, with more new players took it’s toll, and we scrambled a draw. The results not being important at this time of the year – but the performance is. We played some great rugby when we had 2 or more passes on the ball, and that was highlighted by David Rothmaier’s try. Another note that this was Alex Galushkin’s senior debut, who was fearless in defence, and showed the level we need to work towards as a squad.

Our third preparation was held at Wiedenbrücker TV and playing them and Köln. Whilst trying to get our warm up right after a long journey, we were told we needed to having a briefing about the after match sausages! Something I have never witness before! We played first and suffered with indiscipline which hampered our possession of the ball, but we came away 5-0 winners. After a nightmare first half vs Wiedenbrücker TV, the Löwens woke up and saw us run in 6 tries, and Nils Kanngiesser on debut scoring a hattrick in 20 minutes, and then started kicking conversions!

Finally our first Bundesliga game of the season was vs Hannover 78 away was a baptism of fire for a young and inexperienced squad, and maybe the prestige of the opponents had the better of us. We were very timid, and as a result the score line reflected this. Thank you to Nico and Kevin, and all the other supporters who paid 10 euros to support us. Your support is loved by the players! The day after saw the 2nd XV play away to Lübeck, a young Leopold Partmann making his debut at openside flanker got everyone excited for his potential in years to come, in a fine display that was worthy of a player of far greater experience. Plenty of other players making their debut with little experience didn’t seem out of place.

And onto BRC, the first game where we didn’t 40+ away on holiday! a lot of changes due to illness, injury again hampered our display for the home crowd. But having scored 3 tries, and came close to getting the bonus point at 4, there is a lot of promise and potential within the squad.

This was also the weekend where we had our very first 3rd Team game, in partnership with HSV, away to Kiel, many new players who had only trained through the summer making their debuts for the Löwens. They should be very proud of their performance against a vastly more experienced side.

Whilst results may not have been in our favour, we have plenty to smile about, plenty of players making their debuts, some of the best performers being the 18 year olds who have come through the Club’s Youth section. We have more players than every before and regularly get 35+ to training – our record being 53! We have more coaches than ever before who come with a wealth of talent and experience, in Collin Mbongwa and Josh Harvey.

And onto next month, where we travel to Berlin twice for games against RK and the Grizzlies, whilst home games for the 2nd XV vs St Pauli and 3rd XV vs St Pauli.

The Akademie will also be in action in the German Championships in Hiedleberg the first weekend of October, which again will be very exciting!

Thank you for your support, we really appreciate it and it is driving us through this patch whilst we adapt.